Screen is a program that facilitates the management of multiple shell sessions. When you run screen from a Linux command line, it will open a screen session on top of your current command line window, with a few important benefits: 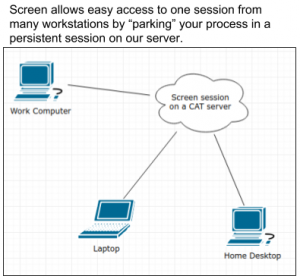 How to use Screen

To open a screen session, type “screen” from the command line like you would for any other command. Once run, you will be placed inside a new screen session, which looks a lot like a normal terminal window.

Once within screen, the main command that you use to manage your shell window(s) is “ctrl-a” combined with any number of other keys. For example, “ctrl-a” followed by “?” will bring up the screen help menu. You will use “ctrl-a” followed by something for virtually everything within your screen session.

From within a screen session, you can also open multiple windows and easily tab switch between them. New windows can be made with “ctrl-a” -> “c”; it’s important to understand that each screen “window” is actually an entirely new shell at the command line. When you create a new window you’ll see that all of your windows are listed at the bottom of the window, and the active window is highlighted in green. It should look something like this:

In order to switch through all of your active windows,  you can use “ctrl-a” -> “n” to go to the next window and “ctrl-a” -> “p” to go to the previous window. Each window also has an associated number, as you can see on the bottom of the above screenshot. An alternative to switching windows is to use “ctrl-a” followed by the tab number to jump right to that window.

You can also detach from a screen session manually with “ctrl-a” -> “d” and then reattach by typing “screen -r” at the command line when you log back into the system.

Importantly, reconnecting with screen -r will open the screen session that you’ve most recently closed, meaning that so long as you don’t accidentally spin up multiple screen sessions it will be enough to always get back to the session you want.

Using this knowledge you could, for example:

All without any fear of losing your work from a system crash or forgetting to save.

From the above sections you should have more than enough working knowledge to be able to start using screen effectively. However, there are some instances in which you might create multiple screen sessions and you will need to know how to manage those effectively.

Re-attaching to a Screen Session

A very common mistake people make when first using screen is to accidentally type “screen” instead of “screen -r” when meaning to re-attach. This will create a second screen session and if you detach and attempt to reattach you’ll see the following:

“Ctrl-a -> \” is a new command that won’t just detach you from the screen and leave it running, it will remove it forever, so use it with caution. After deleting the screen you accidentally created, you should be able to “screen -r” back into the screen session you wanted.

While this does show you the date that each screen session was created, it’s kind of difficult to differentiate which screen is which. Thankfully, screen has a solution.

On creating a new screen window, instead of using “screen” use “screen -S ” to give your new session a name of your choosing. This aids in identifying which screen is which as you can see below:

I have two screen sessions that I’ve named “school” and “work.” You can then reattach to a named screen using “screen -r ” to quickly get back to the workstation you want.